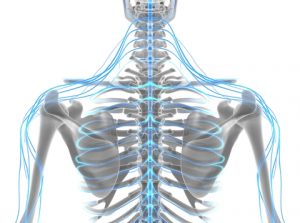 “Sympathetic Nervous System Food Allergies” tells us “Tellingly, epinephrine, the only injection that works for a food allergy attack is a neurotransmitter/hormone of the autonomic nervous system (ANS) that augments sympathetic function.”

You can do this all day: think of a disorder then Google “Sympathetic Nervous System ‘Chosen Disorder’ ” and most of the time (and quite a lot of it is new material) – usually something turns up, and you see lots of phrases like : “Autonomic dysfunction may be an under-recognised cause of …female fertility… or whatever”

So what is your Sympathetic Nervous System ? – don’t beat yourself up if you’ve never really heard much about it as it is something of a Cinderella of both the standard and alternative world of medicine … so far. All your Sympathetic Nervous System is, is a series of what could best be described as mini-brains that lie along the spine, so it is these brains and the nerves that go from them to the different parts of the body.

a) Uses the “Muscle pump” and

b) Gravity to get back home again.

All the “Muscle pump”  is, is every time you move, your muscles squash the veins and squeeze the blood in them. There are one way valves in the veins and so the blood can only go one way… back to the heart.

“Gravity” is easy to understand for “old blood” in the head … it falls down back to the heart. “Gravity” for the “old blood” below the heart is more interesting and the Inclined Bed Therapy site explains how the old blood is less dense than the new fresh blood and so gravity pushes down the new dense blood which provides an extra “push up” to the blood in the veins.

For the Lymphatic system, there is no heart beat at all to move things around, it relies entirely on the Muscle Pump and Gravity to move the lymph which drains the toxins from the tissues – all the tissues in your body… including the tissues around the mini brains – the ganglion – that are the base hardware for your Sympathetic Nervous System.

If you have a bad fall and injure your spine then the muscles either side of your spine go into a protective spasm  – which is not so much a cramp – though it can lead to a cramp – but mainly it just becomes permanently flexed – like when you show off your biceps. Your para-spinal muscles do this to provide a protective corset for your injured spine, for light injuries, this spasm is released when the spine has repaired itself, but for the more serious injuries of modern life that we were not designed for: car accidents etc this spasm stays for ever. If you have this, then this means you lose the Muscle Pump along the spine and the lymph flow is reduced, the tissues become toxic and the mini-brains, your ganglion, get poisoned and do not operate properly.

On top of that when they do send or receive signals they are sending along nerves that may be squashed by the twisted vertebrae.

So how can you fix your Sympathetic Nervous System ?  – It turns out to be quite easy, but you won’t find the answer in a bottle of tablets – all you do is fix your spine using the techniques shown here on www.GoodBack.co.uk

I used to have Scoliosis and Chronic Fatigue Syndrome and a problem with sore eyes and facial spasms. I always saw them as separate issues.

I got my scoliosis fixed using the AMSI machine – the main event – on www.GoodBack.co.uk  and my sore eyes and excessive blinking and facial spasms stopped and I got my energy back – my Chronic Fatigue Syndrome/ME went as well !

Myself and other therapists using these techniques also see lots of patients get rid of loads of other problems by fixing their spines.