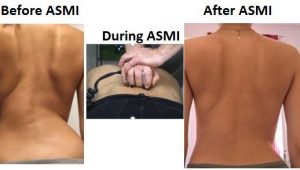 For a real alternative to Scoliosis surgery – not merely yet-another-barely-effective complementary therapy… something that actually works for even high end curves – even the ones that look more like a  deep “Z” shape rather than the usual “S” shape… you need the ASMI (The Advanced Spinal Mobilisation Instrument) .

To get straight to it: the short answer is that the patient lies on a special slightly curved massage couch, the therapist uses the non-Surgical ASMI back fixing machine on their back for 8 to 12 therapy sessions and the scoliosis curve reduces dramatically – As shown in these two videos:

The ASMI (Advanced Spinal Mobilisation Instrument) stretches the tight ligaments that have been holding the vertebrae in the wrong place since the trauma injury that set it all off  by using the ASMI’s “Mobilisation mode” – which is better thought of as the “Ligament Stretching” mode. Then the Reflex mode stimulates, by tapping, the reflexes along the spine and then the vertebrae move back towards their correct position – and then repeat.

How do patients respond the the ASMI treatment ?

There is a distribution curve of responses to the ASMI treatment for Scoliosis. The most common is: In the first 1 to 3 sessions there is a large visible improvement in the curve and the rib hump – often along with a dramatic reduction in pain and other associated issues like fatigue, digestive issues and heavy blinking. Patients are often noticeably taller.

It feels like there is the “core scoliosis” – caused by the initial trauma – and after that there is, over the years, a secondary collapse. This “quick win” in the 1st session or 3, often using less than full power, feels like it is reversing the secondary collapse – sometimes you get improvements in the first minute or so of treatment that are larger than the previous years of various exercise therapies and other treatments that the patient has had.

After this initial improvement the next phase is the “core scoliosis” – where the short tight ligaments, that have been short and tight for years, and have grown like that during teenage growth spurts, need to be stretched. During this phase you can sometimes see small improvements each session, sometimes nothing much visible happens at all – a bit of a plateau phase can occur. Eventually though, the ligaments lengthen and the curve starts to reduce again – this time the “core scoliosis” is being reduced.

After about the 8th to 12th session you are usually getting near the point where “wedging” will prevent the scoliosis from reducing anymore… for the time being. Wedging is where some vertebrae, usually at the worst point of the curve, have grown in a slight wedge shape – so the top and bottom are not parallel. The good news is that they got to be this shape by responding to the huge asymmetric pressures put upon them over the years and so now that the spine is a lot straighter and the pressure on these vertebrae are now a lot more even after the first round of ASMI treatments, they will respond – over time – to these new pressures and even out.

This phase of the treatment is a lot slower and requires an ASMI session once a month/once every 6 weeks perhaps over a few years till the bone modulation process, run by the osteoblast and osteoclast cells that create & destroy bone & ligament where needed and not needed, have done their job.

Why is the ASMI treatment better than surgery for Scoliosis ?

Answer: Ligaments – a lot of “scoliosis exercise therapies focus on muscle – “strengthen the weak muscles and the core…” consequently the moment you stop doing these exercises, you quickly lose any gain you might have had. Scoliosis Surgeons however don’t talk about muscle being a limiting factor in the improvements that they get – for them its the “tough ligaments” holding the curve in place. This means they are limited to what improvement they can get by what they can do in a one surgery session – but with the ASMI you can be treated weekly for a year – decades even should it be needed – and bit by bit those short tough ligaments can stretch so you eventually get better and more lasting improvements – and this does not even begin to look at the safety aspects of surgery. With the ASMI, unlike surgery, there is no limit to the improvement you can get.

What about those “weak muscles” ?

Answer – The action of walking – or just sitting up is a huge body weight exercise that you do for hours each day – your muscles will respond to this. If the vertebrae are in a train-wreck scoliosis situation then some muscles will not be called upon to work much and so will be weaker. Strengthening these muscles with endless hours of scoliosis exercises will do little to deal with the underlying issue – but may assist with secondary collapse a bit. Gains you make will be lost if you don’t keep up with the exercises as normal body movements do not call upon these muscles. These exercises had their hay day 100 years ago during the time of polio – which weakened muscles and caused scoliosis. Modern scoliosis though is, as a rule, not caused by weak muscles and so is not cured by exercises that strengthen weak muscles. The famous Schroth method Yellow Book has wonderful  Before and After photos (every bit as good as the latest ASMI treatment Before & After Pictures) … but they are all in Black & White – from way back in the time of Polio… they are not getting anywhere near the same level of results nowadays . Once the vertebrae are better aligned with the AMSI treatment, the muscles will be called to work and so will strengthen. In a similar manner the ligaments will be called upon and will not re-shrink and re-tighten.

I have found that adult scoliosis tends to require long sessions: 3 hours each to achieve significant permanent changes, and that weekly or fortnightly sessions are best, but when a patient has flown in from abroad then treatment once every two days is used. For more delicate patients, the sessions are a lot shorter and lighter.

Vitamin C – which works well with the B Vitamins

There has been quite a lot of correlation work on scoliosis and low levels of trace minerals selenium etc.

What else ? Long wave ultrasound (40-45 KHz – which is what dolphins use to communicate) …and also used at GoodBack

As you can see from the videos, the ASMI treatment is a serious life changing non-surgical alternative scoliosis treatment to either classic fusion or or the newer VBT surgery, for many cases of Scoliosis.

The time needed and the price are equivalent overall to getting a large back tattoo.

This treatment is available in St Albans UK.

Special offer: Half price video treatments – If you would like to be in a video similar to the ones shown above to consist of : a before & after interview, a few clips of the treatment and a series of the before & afters from each session, then the price is £100 for a 3 hour session.